The Corona virus is also widespread in Cameroon. And of course it is there that the poorest are hit hardest. Here also the HOTPEC orphanage we support.
Also the unrest in the English-speaking part of Cameroon, where the orphanage is located near the city of Buea, has disappeared.

It was a little quieter at the end of last year, school had started again and the university continued its work. On December 20, 2019, four students from HOTPEC were able to accept their bachelor’s degree. Mama Beatrice, the director of the orphanage, thanked MAHZUKAM very much, because our donations also made this success possible.

Corona and the riots make it impossible for us to personally visit the orphanage at the moment. So our communication mainly takes place via WhatsApp.

At the beginning of February – before Corona – local elections were to take place in the southwest region, which the separatists wanted to prevent. Buea and other cities were declared as ghosttowns again and the orphanage had to procure supplies again so that the residents could survive.
In January 2019 they already rented a small farm nearby. Later, with our financial help, they bought two hectares of their own farmland to be able to grow produce independently. .

Many people have left the southwest region, including the technicians who were supposed to repair the solar system. A lot of things are very difficult to arrange and people fight hard in HOTPEC to survive. There are up to 115 people in the orphanage, all of whom have to be cared for.
MAHZUKAM therefore continues to support the orphanage with financial resources.

Curfews and school closings, everything we know also takes place in Africa. There is also the beginning of the rainy season in the Buea area and thus increased activity of the mosquitoes. Some children in the orphanage had malaria and had to go to the hospital. Medicines from Douala also had to be procured because they could no longer be bought in Buea.
Therefore, they had to stock up to get through the curfew period. Here we also helped with donations.

The oven is ready

After a long building stop finally the bricks arrived to complete the oven in the new kitchen. It is now possible to cook more energy-efficiently than on an open fire.
There is also a small drying oven to dry fish. This allows the fish from the ponds to be preserved for a long time. 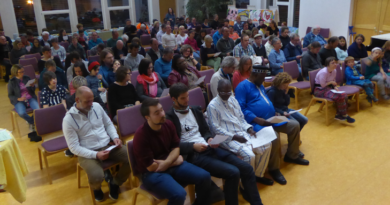 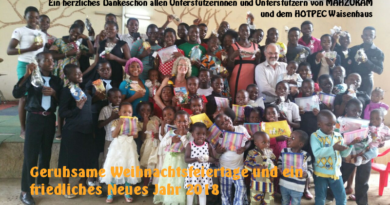 Due to the corona, we are currently not holding any events, no information stands and no flea markets